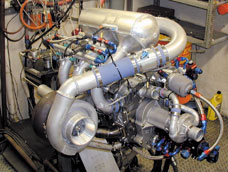 20B 3-rotor engine engineered to produce over 1000 horsepower.

While reading the supercharging technical tips that follow, note that most of what is presented applies to "mechanically-driven supercharged" rotary engines and "exhaust gas-driven turbocharged" rotary engines. In the most general sense, supercharging refers to all engines that have their intake charge artificially compressed. Engines that do not have this compressed intake charge feature are generally referred to as normally aspirated or non-turbo engines.

Supercharging a rotary engine is a topic that generates a substantial amount of discussion and confusion. We have done a great deal of engineering work with turbocharged and mechanically supercharged rotary engines for more than three decades and offer our experience in the paragraphs that follow.

Of note: In 1986 Racing Beat developed a 2-rotor, twin turbo 13B bridgeport engine used in our record-setting 1986 Bonneville Nationals RX-7, that produced over 500 reliable horsepower at 8,400 RPM. During the years 1993-95 we undertook additional development work on a 3-rotor, triple turbo 13G peripheral port engine for our 1995 Bonneville Nationals RX-7 that produced 835 HP at 8,500 RPM. Since then, a similar engine has developed over 1000+ HP.

The most common mistake made by rotary enthusiasts intent on supercharging their engines is to supercharge a stock, unmodified non-turbo engine. Unless you are content to use the power gain only occasionally, and even then only briefly, you run the very serious risk of catastrophic engine failure. Sustained use generally brings failure, and the more common failures include broken apex seals and flattened apex seal springs. On occasion a stationary gear breaks, or a rotor gear moves away from the rotor and jams against a side housing, or a bearing fails due to overheating. With any of these failures, a complete engine rebuild is required.

The causes of these problems, and others, are many. Superchargers generate heat loads well in excess of what a stock engine can handle: the stock water and oil cooling systems are overwhelmed and simply cannot carry away the excess heat fast enough.

Additionally, the compression ratio commonly found in non-turbo engines is not low enough for supercharger applications. Depending on horsepower requirements, a compression ratio as low as 7.5:1 may be in order for reliable operation. The higher the boost level you desire to run, the greater the likelihood you will need to address the issue of a lowered compression ratio. In our experience, we have found that 5 psi., approximately, is the threshold above which the stock, non-turbo compression ratio is no longer appropriate.

As the above comments would suggest, we do not recommend supercharging an otherwise stock, "non-turbo-based" unmodified engine. When you weigh the anticipated power gains against the very real likelihood of a premature, and costly, engine failure it's likely not worth the headaches.

If you are willing to build an engine that is capable of handling the increased heat loads that superchargers develop, the following tips will prove beneficial, increasing the likelihood of a long-life engine.

2. Use the oil pump assembly found in the 1993-95 engine, or a dry sump oil system. (This requires using a 1993-95 front housing because of the extra passage at the bottom of the pump.)

4. If you plan to use boost levels in excess of 5 psi, use lower compression rotors.

5. If it is possible on your year vehicle to do so, adjust the output on the metering oil pump unit to double the flow at 2,000 RPM. If the flow cannot be adequately increased in this fashion you will need to pre-mix oil with the fuel.