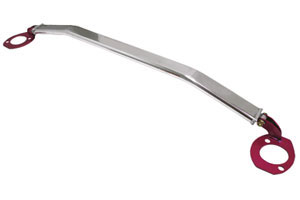 Select mounting bracket for your Miata:

This Mounting Bracket is intended for use with the Racing Beat High Flow Air Intake Assembly...

This Shock Tower Mounting Bracket is intended for use with the High Flow Air Intake Assembly...

Over the years we have received many requests for "strut" tower braces that are compatible with our Racing Beat High Flow Intake Assembly kits. For the early models (1990-97) we do not offer a brace, for the later models (1999-2005) we offer a mounting bracket that can be used to retrofit the Mazda factory installed shock tower brace for use with the Racing Beat High Flow Intake.

Well, since the Miata is not equipped with a "strut" type suspension, we have never been compelled to offer a "strut" brace! Unlike some automotive applications that utilized McPherson strut suspension designs, the Miata was designed with a more performance-oriented front and rear double wishbone suspension.

On many early RX-7 applications, which utilized the McPherson strut style suspension, the tops of the strut "towers" were a more integral component of the suspension and bore both vertical and horizontal loads of the suspension. Many of these early cars featured upper strut towers that were inboard of the inner body panels and suffered measurable flexing while under load. For these applications, a brace between the tops of these strut towers provided significant structural rigidity. If room allowed, further bracing of the towers against and the firewall (a triangulated brace) further added to this rigidity.

On the Miata application, the tops of shock towers are subjected to primarily vertical loads from the upward movement of the springs and shocks. Adding a brace between the tops of these towers has not shown any measurable handling benefit during our testing.

Can I install a brace on my car?

Sure, why not! They look good and come in different colors, just don't expect much of measurable performance benefit from them. Besides, the simple design of many of these braces offer little in the way of actual reinforcement. The bends, joints, and angled cross braces are natural flex points that will simply "give" with the flexing of the vehicle. What about bracing against the firewall? Go ahead and grab the firewall on your Miata just behind the engine and give it a push. The sheet metal is thin and flexible and offers little in the way of any significant bracing support.

Do racers use them?

Some do, and some don't. Since the benefits are very difficult to measure, some prefer to just save the otherwise additional weight increase and remove them from the vehicle altogether.

So why did Mazda include them on the later cars?

Increasing the rigidity on a car is typically a benefit to handling performance. Over the years we have been privileged to many of Mazda's new production models during the R&D stage and have seen firsthand many of the major and minor improvements during the prototype stage. Since the introduction of the Miata in 1990, we have seen successive attempts to increase the rigidity of the Miata chassis. In the case of the shock tower brace, we believe that this brace was added to the chassis as part of this upgrade process. This upgrade was just one component of many structural upgrades have been undertaken over the years.

I still want to install a brace on my Miata that is equipped with the Racing Beat High Flow Intake, what brace will fit?

There are MANY of these braces on the market so we can't be sure of the fitment of all of them, but we have been told that a few of these are compatible. For the 1990-93 Miata - None; 1994-97 Miata - Freedom Design, REactive, 1999-05 Miata - Freedom Design, REactive (these are compatible, but the fitment is very tight). The final fitment of any brace with the Racing Beat High Flow Intake is the responsibility of the user.