(Select Any Photo Below For A Larger Image)

How does the Racing Beat REVi Intake differ from the Mazda intake for the RX-8?

The stock RX-8 air box is very efficient unit and finding additional horsepower through traditional approaches has proven to be a challenge! But we have uncovered a few additional horsepower, and it is one of the few ways that we found to get additional power from this application. (More information on this subject will be posted in the near future.)

There are several key differences between the Mazda intake and the Racing Beat REVi intake system, with one of the primary differences being the tuned length of the inlet. In addition, the number of inlet screens in the intake tract is different; instead of the two mesh screens that are incorporated into the stock air box, the Racing Beat REVi intake utilizes only one.

What is the function of the mesh inlet screens?

In order to accommodate the shape of the rectangular stock filter, Mazda’s engineers have cut away a portion of the inlet bell inside the stock air filter box. Because the rectangular air filter is positioned at an angle inside the air box, there's a tendency for the air not to enter the air horn in a uniform and even flow. Mazda therefore saw the need to include two small mesh screens, one after the other, in order to straighten the flow before it enters the mass air flow (MAF) sensor.

Does the REVi Intake retain these mesh screens?

We determined early on that it would be necessary to incorporate at least one mesh intake screen in our intake system. Mazda originally planned to use just one screen, but during late testing they determined that they needed to add one additional screen to provide good idle stability. During development and testing of the our intake we determined that we needed only one screen because the REVi entrance into the MAF sensor was very "balanced" – that is air enters into the inlet air horn uniformly form all sides. In the stock air box, Mazda chose to cut away a portion of the air horn to get a longer tuned length. This compromised design caused the flow to "swirl" as it entered the bell and continued swirling as it passed the MAF sensor, resulting in an unacceptable variable output reading. Tests showed that the use of one mesh screen in the stock box reduced this "swirl" condition; the addition of a second screen eliminated this from occurring. 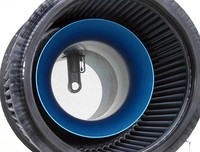 Unfortunately, each screen costs about 1 HP at high RPM, so using fewer screens is an advantage. In our dyno testing at "idle", we found that the MAF sensor voltage output from the stock air box (two screens) and the Racing Beat REVi Intake (1 screen) both have about .005 volt "scatter" – natural fluctuations with time. By contrast, another popular aftermarket intake kit (with no screens) has roughly .050 volt scatter – 10 times as much! – which causes idle instability and possible engine stalling.

What is the purpose of the Variable Fresh Air Duct (VFAD) unit?

The Variable Fresh Air Duct (VFAD) is a vacuum operated intake valve that is incorporated into the fabric fresh air duct under the nose of the RX-8. The actual VFAD assembly is located under the nose of the car at the entrance to the stock air box. Contrary to many people's expectation, its NOT a tuning device for power – it is a tuning device for noise! Under most driving conditions (low RPM, low power) it draws intake air through the fabric duct to reduce intake noise. At 5250 RPM, the valve opens allowing some intake air to bypass the long fabric tube and reducing the pressure drop.

In our testing, using the stock air box with the VFAD operating as intended by Mazda, this assembly caused no measurable power loss. Removing it merely adds a small amount of noise below 5250 RPM.

Does the REVi Intake incorporate the stock air inlet duct and VFAD unit?

Has the size of the inlet opening been increased on the REVi Intake?

Our research has concluded that the stock air box has a relatively restrictive inlet, while the design of the REVi air box maximizes the possible size that the incoming intake air can enter into the filter box in order to reduce pressure drop entering the box. The REVi air box will eventually have a cold air ram that matches up to the opening in the sheet metal radiator support. (Available summer 2005)

What is the importance of the air horn in the RX-8 intake?

During the engineering phase of the Racing Beat intake unit, the goal was to design a filter that allowed us to create an optimal shaped air horn, with regards to both length and horn shape, and place it inside the air filter element. With this design, we have achieved a smoother, more uniform airflow entry into the bell as the bell is continuous and not truncated as the Mazda stock air horn. The length and shape of the air horn has been determined by exhaustive testing on the Racing Beat engine dyno. Literally hundreds of dyno runs using an otherwise stock high-power Renesis engine have been conducted in order to determine the exact specifications of the air horn that is incorporated into the REVi Intake.

What type of filter element is supplied with the kit?

The REVi Intake incorporates a custom-designed K&N filter element made specifically for Racing Beat. The main features are a large surface area and a uniform entrance into the bell, allowing us to eliminate one of the mesh intake duct screens.

As will all K&N Filters, this unit comes backed with a K&N Million Mile Warranty. This unit can be removed, cleaned, and reused for the life of your car with the use of the K&N Filter Charger cleaning kit.

What are the specifications of the Mass Air Flow (MAF) tube?

The Racing Beat mass airflow tube is a fully machined aluminum flow body that mounts the mass airflow sensor. (The stock MAF sensor is retained.) We decided against using plastic for this unit, and we determined that we wanted something more substantial and more stable than a plastic unit as a flow control device.

The inside dimensions of the MAF tube have not been changed as compared to the stock unit, however, we have found that the stock unit is not actually round, making it difficult to determine the exact inside diameter of the stock unit! It appears that this may be due to manufacturing tolerances; we had to average the stock diameter. We did not intentionally try to make our tube a different diameter; we tried to determine the size as close as possible to the original unit. Changing the dimensions would effect emissions, power, and apparent mass airflow. The mass airflow output from the sensor is based on a given diameter. If you change this diameter, you change the meaning of the output. Although there might be performance benefits from increasing the tubing diameter, corresponding changes to the ECU programming would be required to account for this change.

Will the sound level output be louder than stock?

The sound level of this intake is slightly "throaty", and approximately 2-3 db louder than stock. This increased sound level adds a bit more aggressiveness to the engine note, without being overwhelming or annoying.

The difference as compared to the only other intake that we have tested, which was the unbaffled K&N system was extreme. The K&N was extremely loud and harsh, and use on a daily driven car could quickly become tiresome!

What are the performance gains over the stock system?

A significant portion of the development and research that we have been conducting with the Mazda Renesis engine during the initial 1-2 years was under contract with Mazda USA. The resulting data obtained from this development and testing is proprietary to Mazda USA.

Regarding the Racing Beat REVi Intake Kit, we are faced with a conflict of interest issue if we publish the test data results of the Racing Beat intake, while using the same proprietary test data that was obtained on behalf of our client, Mazda USA, as a baseline comparison of a stock Renesis engine.

Our test results are as follows:

Knock Sensor - The reason for unbolting the knock sensor is that our testing has shown that the ECU sometimes randomly retards the ignition even when there is no actual detonation occurring. (Detonation - pre-ignition combustion of the compressed intake charge.) The difference is only 1-2 HP, but this is more than the differences we are looking for. We obtain more consistent test results by unbolting the sensor (but leaving it connected electronically so that it doesn't cause a fault in the ECU), thereby preventing it from feeling the vibration it mistakenly thought was detonation.

Is the REVi Intake suited for street or racing applications?

Both, but we have designed the REVi Intake with "streetability" as one of most important considerations. After careful review and testing of other available intake kits, Racing Beat has addressed many of the drivability issues that have plagued some of these other systems: rough idle, possible engine stalling, and/or loud intake sound levels.

If you are interested in obtaining maximum horsepower at the extreme upper end of the RX-8 power band (i.e. racing or high performance applications), but are willing to sacrifice some level of drivability, we can make a recommendation for an alternate product from another manufacturer.

What does REVi mean?

It's really a combination of words. The letters REV include many elements, including: revolution, rotary, Renesis, and evolution! Of course, the 'i" stands for intake.