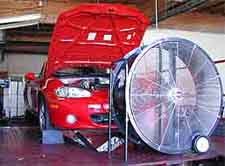 Update Note: This test was originally undertaken in 2001 during development of the Racing Beat header described below. The header used for comparison was produced by a company named "Brainstorm Performance", which is no longer conducting business in the Miata aftermarket.

We had read reports that the Brainstorm 4-into-1 header produced more power than a typical Tri-Y (3-2-1) design on the 1.8 liter 1999-2000 Miata. In order to study the performance of this header design, we conducted a series of comparison dyno tests.

These dyno tests were conducted on 2/8/01, at Dynamic Autosports Inc.

After reading reports that Brainstorm's 4-into-1 header was producing impressive power gains on a 1999-2000 we decided to research the claims.

But how would a 4:1 design prove for a street application? We have found that a 4:1 design can be much louder than a Tri-Y design. would this be true? Would it provide more, or less power? Should we change the design of our headers if the advantages of 4-into-1 design proved significant? (A 4-into-1 design costs less to produce due to fewer parts and reduced manufacturing time.) 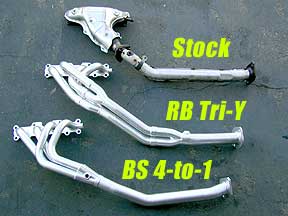 Both the Brainstorm and Racing Beat prototype headers were designed to be used on a 1999-2000 Miata. With the introduction of the 2001 Miata, Mazda changed the design of the EGR pickup tube from a "female" fitting, back to the earlier 1990-2000 "male" style fitting. For the purpose of this test, the fitting on the header and the intake manifold were sealed.

The stock exhaust manifold on the 1999-2000 Miata was a heavy cast-iron unit that bolted to either: 1) a catalytic converter/ front pipe assembly (on California emissions equipped cars) or, 2) a front pipe only (federal cars).

With the 2001 model year, Mazda has eliminated the catalytic converter that was incorporated on the 1999-2000 California cars. All models were then equipped with tubular-style upper manifold, mated to a front pipe. The #1 oxygen sensor mounts at the upper end of the front pipe. (See above photo)

The Racing Beat header featured thick flame-cut mounting flanges, mandrel-bent mild-steel tubing, and finished with a high temperature ceramic coating. A recess had been cut into the rear outlet flange to allow the use of a factory style "O" gasket. The oxygen sensor ismounted in the header after the last tube collector. An extension wire is not required.

The Brainstorm Header also features a thick flame-cut mounting flange, mandrel-bent mild-steel tubing, and finished with a high temperature ceramic coating. No provision had been made for a gasket. The oxygen sensor mounts in the header at the collector. A small bracket is attached to the inside of the collector to secure the header to the stock bell housing bracket.

Both headers appeared to be comparable in workmanship, quality, fit and finish. Each was installed into the test car with no fitment problems. (For this test, the small bellhousing attachement bracket was not used on the BS header.) 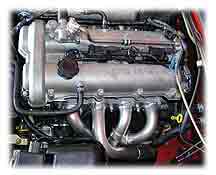 All dyno test sessions began with a series of "baseline" runs. Typically, two or three runs are conducted to establish a baseline performance number. Dyno run #3 was selected as the baseline.

For a printout of the dyno chart and numerical data, select a sheet at right.

For a printout of the dyno chart and numerical data, select a sheet at left.

Again, after waiting approximately 15 minutes for the car to cool, the Brainstorm header was installed. Since a recess for a gasket was not supplied in the outlet flange, the stock gasket was not used. Three test runs were conducted. Runs #8 and #9 were nearly identical. Run #9 was selected.

For a printout of the dyno chart and numerical data, select a sheet at right

From our past experience we had reason be believe that a 4-into-1 design might prove to be moderately louder than a tri-Y design header. With the car on the dyno, a sound measurement was recorded using a decibel meter. To isolate tire noise resulting from the dyno, a static test was conducted with the car in "neutral". The engine was brought to 3000 RPM and the sound measurements were recorded. Measurements were recorded in the following three positions;

In this static position, the recorded sound measurements for ALL components were nearly identical. The measurements are as follows: 1) Rear - 76 db, 2) Side - 76 db, 3) Front - 86 db.

During the dyno test, when the engine was under acceleration, both aftermarket headers were perceived to be noticeably louder than these measurements. The analog metering device makes capturing an accurate recording of a fluctuating sound level nearly impossible. Further, the sound produced by the contact of the tires and dyno drum cannot be isolated from the engine exhaust note. At a later date, we will attempt to record the decibel levels from within the driver's compartment once an acceptable measuring procedure can be established.

After the test session was finished, the 4-into-1 header was left on the car for evaluation purposes. During "on-road" evaluation, the sound level was noted to be moderately louder than stock during acceleration, particularly from 5000 RPM upward

Both headers performed well in this comparison. Each displayed similar levels of quality and craftsmanship. The performance numbers that were gathered from the dyno tests demonstrates that both headers yielded very similar performance gains.

Further review of the dyno curves illustrates the subtle performance differences between these two headers. The Racing Beat header shows a consistent improvement throughout the powerband, with a slight horsepower and torque dip in the 3500-4500 RPM range and again after 6200 RPM. The Brainstorm header also shows improvement throughout the powerband with a horsepower and torque dip between 2600-3500 RPM. This header offers slightly more power between 6300-7000 (redline) RPM. The overall characteristic of the power curve for the Racing Beat header reflects the slightly higher average horsepower value.

All data provided above is presented as accurate and unedited. We attempt to provide "average" test results that reflect the true performance characteristics of each product. Experience has shown that dyno test results will vary from car-to-car, from test session-to-test session, and product-to-product.

Contact Racing Beat for more information or comments regarding this test.