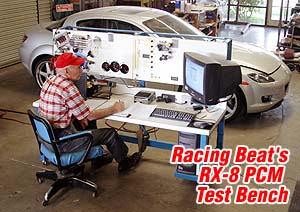 These are the specific areas where Racing Beat modifies the PCM data:

We optimize the fuel maps for best power.

REN.V1:
No changes were made (or needed) below 3500 RPM, and most changes were above 8000 RPM. This is where the stock mixture goes substantially rich, wasting fuel and power. For use with stock or aftermarket "street" exhaust systems. Review REN.V1 Dyno Chart

REN.V2:
On the 2004 RX-8 REN.V2 flash the security immobilizer feature is disabled, however on all later 2005-2008 versions this feature is retained. The REN.V Track/Race Flash was developed for applications that operate at continued high RPM's utilizing an "open" or very low restriction exhaust system. Specific emphasis was devoted to optimizing mid-range performance as a result of the benefits provided by the low restriction exhaust system.

REN.V1 & REN.V2:
We raised the rev limit from 9000 RPM to 9300 RPM to take advantage of the increased power available at that RPM once the mixture is changed. Testing has shown that 9300 is an acceptable RPM for the engine. Mazda chose 9000 in part because power was dropping so fast at 9000 there was no point to revving further. Now, that is not true.

REN.V3:
For the ported engine version of our PCM flash we raised the rev limit from 9000 RPM to 9500 RPM to take advantage of the increased power.

REN.V3:
The operating points for the intake 6-port actuator valves and the Varible Dynamic Effect Intake-Air (VDI) operating valve were changed. These intake changes can be noted on the REN.V3 Dyno Chart comparison sheet. 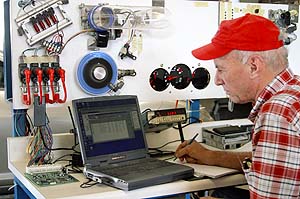 The RX-8 Power Control Module is a powerful computer that has been programmed with strategy carefully optimized for the Renesis engine. The module is supplied with 3 maps for each main variable - leading timing, trailing timing and fuel. These maps are for hysteresis (deceleration), first through fourth gear, and fifth and sixth gear. Some of these maps are the same.

This PCM is a "learning" computer (like most OEM units) and uses heated oxygen sensors to build (3) long term fuel trim levels - idle, low speed and cruise. The computer undertakes this by first calculating the fuel injector "ON" dwell time based on the Mass Air Flow (MAF) meter output, then adjusting that amount with numbers from an "Enrichment Table" (which is what Racing Beat modifies). Once this "ON" time is output to the injectors, the #1 (front) oxygen (O2) sensor measures the resulting exhaust for oxygen concentration, converts that reading to a "Lambda" value (the ratio of the actual fuel mixture to an ideal "14.7" mixture), compares that to a "look-up table" of target Lambda values, then adjusts the mixture to exactly match the target Lambda value. This is necessary because no engine system (the engine and all of its components) is actually identical to any other - and even if it was, age and wear would soon change that. This system "corrects" the mixture, but it also keeps track of the changes it has to make with a "statistical algorithm" that looks for a pattern of average changes it finds necessary. When it identifies such a pattern, it makes this "trim" value part of its basic calculation to allow it to get closer to the target mixture more quickly. Most importantly, when the PCM switches to "open loop" (no oxygen feedback control) at throttle settings above freeway cruise RPM and load, the system continues to use the highest trim level to correct the mixture. In other words, the PCM generates a "correction factor" at freeway cruise, and then continues to use that factor at high power. These trim quantities can be built in as little as a few minutes, depending on the operation of the engine.

As mentioned earlier, there are 3 levels of trim, all independent of each other. This is why "piggyback" controllers can cause such problems - when the controller changes some output, often the long-term learning corrects for this change. This complexity also had a lot to do with the time it took for us to understand this information.

In developing this flash, we disconnected the Front Oxygen Sensor so that we had a stable, unchanging platform. Otherwise, the system would continually develop new trims that we would have to chase. Of course, it is not appropriate for you to do this (except in racing) because the system NEEDS the oxygen feedback information to correct the engine’s operation at light to moderate throttle settings. The fact is, in our experience, the PCM will usually build a 2% to 3.5% top level trim, which means the engine is running that much richer than best power mixture. In general, this is a small amount, and will only cause a fraction of 1% loss of power. On the other hand, if you don't want to run with this factor (i.e. racing applications), you have two choices:

There was virtually no room for improvement in the timing maps. We have tried advancing and retarding the timing with no consistent improvement.

The knock sensor is very sensitive, and can interfere with engine operation in some cases. While developing the Racing Beat flash, we disconnected the Knock Sensor mechanically (unbolted, wrapped in soft material and laid on top of the engine) but not electrically (if disconnected, the PCM will fault.) We found that, if we didn't do this, power was slightly affected - but not consistently.

We tried a number of spark plugs. We found that the stock plugs are very good and probably best for a stock or slightly modified engine on the street. For competition, the NGK R6725-10.5 or 11.0 make a couple of more horsepower, but are too cold for street use except in boosted engines (where they perform very well). Gaps on these plugs should be approximately .032" to .035".

We made a serious effort to look for any increase in mileage we could possibly find - but to no avail. Since mileage is the result of operation in oxygen feedback, all we had to do was change the target oxygen lambda numbers in the PCM maps and we were able to uniformly lean the mixture any time the engine was in feedback. We tried approximately 1 1/2% lean of the standard maps. As a result, we got about 1/2% improvement in the brake specific fuel consumption (BSFC - a way of measuring the efficiency of turning fuel into power) and with it some slightly rough operation. After further testing, we confirmed that for the engine as it is now configured, Mazda has already cut the mixture to maximum efficiency - it is so close to ideal there was nothing significant we could do the improve it. This was discouraging to discover, but common sense says Mazda tried very hard to optimize fuel mileage - and our findings confirmed this.