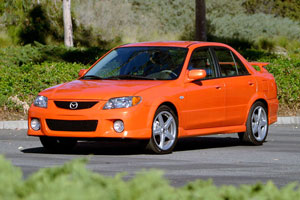 Question And Answer Session From Mazda Regarding the Mazdaspeed Project (PDF)

Turbocharged 2003 MAZDASPEED Protegé to be Joined by Line of High-Performance Parts, Accessories and Apparel

NEW YORK – Mazda North American Operations (MNAO) today announced it will introduce a turbocharged MAZDASPEED® Protegé in the fourth quarter of 2002. This is the first use of the MAZDASPEED name on a street legal Mazda in North America.

"MAZDASPEED has a very devoted following in the U.S. and has certain performance expectations," said Charlie Hughes, president and CEO of MNAO. "This maximum performance Protegé is the first road-going Mazda in the U.S. that's earned the right to wear the MAZDASPEED nameplate." In addition to unveiling a prototype of the 2003 MAZDASPEED Protegé, MNAO also announced that it is planning to expand its line of MAZDASPEED components and will offer street performance parts and accessories.

The 2003 MAZDASPEED Protegé has been designed to achieve the highest standards with enhanced performance, handling and braking. It will have unique exterior and interior styling cues that'll make it stand out on the road. A successor to last year's Mazda MP3 sedan, which gained superstar status among the automotive enthusiast magazines, the MAZDASPEED Protegé boasts performance modifications over and under the hood. Mazda's legendary 2.0-liter four-cylinder power plant is fitted with a Garrett T25 turbocharger, high performance air-to-air intercooler and limited-slip differential.

"The MAZDASPEED Protegé will drive the Mazda attributes – performance, handling and styling – to an even higher level," Hughes added. "Most important, MAZDASPEED will bring a tremendous smile to every Mazda enthusiast in America." 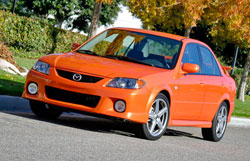 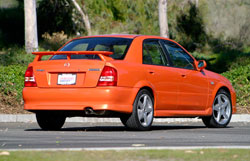 NEW YORK – The new 2003 MAZDASPEED® Protegé made its debut today amid New York City fanfare and excitement. The turbocharged sport compact sedan will be joined by a line of MAZDASPEED performance parts, accessories and apparel, all designed to bring Mazda even closer to its sports car roots.

Based on last year's hugely successful limited-production Mazda MP3, the 2003 MAZDASPEED Protegé is a substantial step forward in the performance arena. Working in partnership with world-class automotive racecar engineers on chassis, drivetrain and turbo development, Mazda has produced its highest performing, most responsive Protegé to date.

"The MAZDASPEED Protegé was initiated by a group of Mazda engineers here in the United States who are hard-core enthusiasts," said Charlie Hughes, president and CEO of Mazda North American Operations (MNAO). "They've taken everything that made the MP3 an automotive-press superstar and engineered it to the next highest level."

Available in the fourth quarter of 2002, and limited to only 2,000 units for the U.S. and Canada, the 2003 MAZDASPEED Protegé boasts an aggressive appearance and enhanced performance package, including an inter-cooled turbocharger, limited-slip differential, ultra low-profile tires, larger wheels, more powerful European-specification four-wheel disc brakes, and a 450-watt MP3 audio system by Kenwood.

Mazda selected Callaway Cars, Inc. to assist its engineers in taking the Mazda 2.0-liter DOHC I-4 engine to a much higher performance level. Pumping up the MAZDASPEED Protegé's heart rate is a Garrett T25 turbocharger system. The turbocharger incorporates the latest in aerodynamic and ball-bearing technology. With Garrett technology on board, the vehicle gains increased acceleration without sacrificing overall efficiency.

Racing Beat, a well-known tuner of Mazda vehicles for more than 30 years has most recently created exciting performance and aftermarket products for the Protegé, MP3 and Miata, was asked by Mazda North American Operations' Research and Development team to lend its expertise in the creation of the new MAZDASPEED Protegé. Working together as they did with the MP3, Mazda and Racing Beat focused their efforts on chassis refinement, suspension upgrades and a high-performance rear muffler. The result is a sport compact sedan with even better handling and overall performance than its predecessor.

The special Tokico dampers on the 2003 MAZDASPEED Protegé have been designed to improve steering feedback and response, control excess chassis motion and keep the tires planted firmly on the road surface. The twi n tube low-pressure design uses a multistage variable-aperture sandwich-valve system consisting of precision spring plates and angle-drilled piston ports. This sophisticated oil-flow-management system provides just the right amount of resistance at a wide variety of suspension motions and velocities. 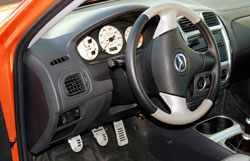 Sparco, a leading racing accessory manufacturer, and Mazda joined forces to create the interior of the limited-production MAZDASPEED Protegé using racing-inspired components such as drilled aluminum foot pedals with rubber inserts for better heel-and-toe control and an aluminum Sparco shift knob to make shifting the close-ratio five-speed gearbox with its shortened throws even more fun. Other changes to the interior include silver-faced analog gauges, suede-like seat bolsters and leather-wrapped NARDI steering wheel with colorkeyed stitching.

This powerful 450-watt, four-channel (50-watts per channel) system features six speakers, an eight-inch subwoofer and a 250-watt amplifier. Both the subwoofer and amplifier are mounted under the package shelf in the trunk. One of the most versatile audio systems ever offered, the Excelon KDC-MP919 allows customers to listen to standard AM/FM radio stations or play conventional CDs and MP3-encoded CD-R/RWs. The Kenwood KDC-MP919 has a fully motorized self-hiding faceplate that doesn't appear until the ignition is turned on. Before leaving the vehicle, the driver has the option of either removing the faceplate entirely for added security, or letting it automatically disappear from view by simply switching off the ignition. The KDC-MP919's MegaMotion™ Display readout provides high-resolution visuals and moving images. Plus, the unit is pre-wired to accept Sirius® Satellite Radio, which includes 100 digital channels of music, talk and news beamed down by three satellites for national coverage. Built-in high- and low-pass electronic crossovers allow the driver to control the range of signals sent to the speakers. System Q Sound Control provides five pre-set EQ curves (e.g., rock, jazz, etc.) and three speaker-matching EQ curves for tone tailoring. Each of the four 50-watt amplifiers supply the muscle, and the 4.5V preouts provide superior signal-to-noise performance. With an optional adapter, Dual-Zone Source Control provides separate source and volume control for front and rear. For even easier operation, the Kenwood system uses a round volume control knob.

The 2003 MAZDASPEED Protegé is covered by a comprehensive three year/ 50,000-mile warranty that includes every part on the vehicle except those subject to normal wear. In addition, the MAZDASPEED Protegé is covered by a five-year/unlimited-mileage corrosion warranty. Mazda North American Operations is responsible for the sales and marketing, customer parts and service support of Mazda vehicles in the United States. Headquartered in Irvine, Calif., MNAO has more than 700 dealerships nationwide.

The following world-class automotive racecar companies worked in partnership with Mazda to develop the 2003 MAZDASPEED Protegé:

In 1976, Reeves Callaway founded Callaway Cars after concluding a successful sports-car racing career. He quickly channeled his passion for speed and vehicle dynamics into building a business that would allow him to create dramatic new levels of performance for some of the world's best-known brands. Mazda and Callaway engineers set out as a team to develop the best possible turbocharged performance for the new MAZDASPEED Protegé. The Garrett T25 ball bearing turbocharger was selected as the primary boosting system. This turbocharger was chosen based on the latest advancements in ball-bearing and aerodynamic technology. While the art of powerful engineering soon became synonymous with Callaway products, Reeves Callaway did not forget the most important racing lesson — power without driveability and reliability doesn't get you to the winner's circle. It is the same attitude that is embodied by MAZDASPEED. Today, Callaway is an internationally recognized brand, known for its unique ability to consistently transform the ordinary into the extraordinary. From component and system engineering through complete vehicle design and development, Callaway continues to specialize in uncovering the true performance potential of every project its team takes on.

Tokico has been manufacturing shock absorbers, brake parts and other hydraulics for more than 50 years. The company is a major original equipment supplier to a variety of automotive manufacturers, including Mazda. Responding to industry demand for a shock that could provide both good stability and ride quality, Tokico developed the twin-tube, low-pressure gas shock absorber. Tokico broke ground on this technology in the mid 1970s and has since become a benchmark for the industry. The Tokico shock absorbers were designed to control excess chassis motion and keep the tires firmly planted on the road surface. The twin-tube low pressure design uses a multistage variable-aperture sandwich-valve system consisting of precision spring plates and angle drilled piston ports. This sophisticated oil-flow-management system provides the right amount of resistance at a wide variety of suspension motions and velocities.

A company that shares the same passion for motorsports as Mazda, Sparco was founded in 1973 by two race drivers who are dedicated to both safety and racing. A leader in racing accessories, Sparco added their renowned foot pedals and shift knob to the MAZDASPEED Protegé, giving the enthusiast ultimate control and grip in shifting gears. By working with top racing teams throughout the world for more than 20 years, Sparco has been able to design the highest performance accessories that harness control and precision for automotive enthusiasts.

An exclusive to Mazda, Racing Hart (Takechi Project Co. Ltd) wheels were specifically designed and developed for the introduction of the Mazda MP3 in 2001. Racing Hart again teamed up with Mazda to design the all-new five spoke Racing Hart wheel for the 2003 MAZDASPEED Protegé.

In 2001, Mazda partnered with Kenwood Car Audio to debut a factory-equipped Mazda MP3 with a high-energy sound system, which was an industry first for the 2001 Mazda MP3. The companies teamed up again to equip the MAZDASPEED Protegé with an all-new high-energy sound system that features an in-dash CD/MP3 receiver. Fully equipped with a 450-watt amplifier, the MAZDASPEED Protegé runs seven speakers ranging from two mid-level 6" X 9" speakers and an independent trunk mounted 8" subwoofer enclosure. Kenwood has been the industry leader for more than 40 years, beginning with designing and manufacturing Japan's first FM tuner. From building the world's first audio/video amplifier for home theater use to developing the first antitheft car cassette deck, Kenwood continues to make its mark in the electronics industry. Mazda North American Operations is responsible for the sales and marketing, customer parts and service support of Mazda vehicles in the United States. Headquartered in Irvine, Calif., MNAO has more than 700 dealerships nationwide.