In 2007, Mazda design team set out to work on a series of concept vehicles that were meant to illustrate Mazda's corporate philosophy. One aspect of this project was the idea of "bringing to life" one of these concept cars to show the world that great designs could be brought forward from paper, to concept, to completion. During the development of the Furai concept race vehicle, Mazda approached Racing Beat with the request to build a ethanol-powered 3-rotor peripheral port intake engine for use in the vehicle. In mid-2007, this engine was assembled, tested, and installed into the Furai vehicle by Racing Beat. Jim Mederer, Racing Beat's cofounder and chief engineer, oversaw this engine project from inception to completion. Jim's signature touch was the design and hand-fabrication of the rotary-shaped muffler canister that was included on the Furai concept vehicle. 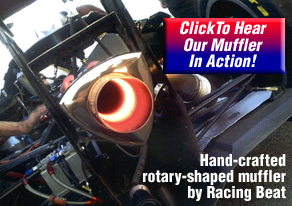 These mufflers are now availble from Racing Beat!!
For More Information:

The following is official press release from Mazda's corporate site:

Mazda USA - Release 2008 - Inspired by the fact that, on any given weekend, there are more Mazdas and Mazda-powered cars road-raced in the United States than any other brand, the Mazda Furai is the sort of car that could only come from a company that incorporates the "Soul of a Sports Car" into everything it builds, but with an eye toward the future and the environment through the use of ethanol (E100) produced by British Petroleum (BP).

Furai takes Mazda's unique Nagare (Japanese for "flow") design language a step further as it is translated into a concept car based on an American Le Mans Series (ALMS) racing car. The car utilizes the Courage C65 chassis the company campaigned in the 2006 ALMS series, and the 450-hp 3-rotor rotary engine that distinguishes it from anything else on the track.

"Furai purposely blurs boundaries that have traditionally distinguished street cars from track cars. Historically, there has been a gap between single-purpose racecars and street-legal models — commonly called supercars — that emulate the real racers on the road. Furai bridges that gap like no car has ever done before," remarked Franz von Holzhausen, Mazda's North American Director of Design.

Mazda's critically acclaimed Nagare design language describes the flow of water, air, people or things moving in one direction. Mazda Nagare is flow, with an insightful and spirited styling, which, in Mazda Furai, invokes a raw, unfettered desire to possess everything this car represents."