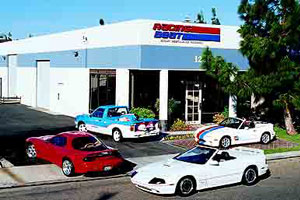 Racing Beat uses a variety of engineering tools to develop new products, evaluate suspension components, and tune racing engines. Listed below are the various equipment that we utilize and the testing methods that have been incorporated.

The Racing Beat engine dyno facility is located in our R&D and Production Building. Constructed shortly after we moved to this expanded facility, the engine dyno forms the core of our testing process.

Data that is actively collected during an typical test run:

Racing Beat uses a Dyno-Jet chassis dyno during the R&D phase of select product development. Prototype exhaust and intake systems can be quickly tested during back-to-back test sessions, allowing for further refinement and tuning per the dyno results. Our typical dyno test sessions involve recording baseline vehicle horsepower and torque measurements, and then dyno measurements after the installation of the prototype aftermarket component. When performing exhaust system testing we typically remove the muffler section from the vehicle and record measurements from the resulting "open exhaust" system. The recorded baseline and "open exhaust" measurements provide a performance target range during the development phase of an exhaust component.

Break-in periods can vary depending on the type of engine and the intended application. The more "stock" the engine is, the longer the break-in period. For example, a new-stock engine for a Mazda project vehicle was broken in for 16 hours, per their requirements. We usually break-in a stock engine about 4 hours, race engines between 3-4 hours. Once break-in has been completed, full-power dyno runs can be conducted for product development or engine tuning purposes.

Break-in time and procedures on a race engine differs from a "stock" engine. First, race engines by definition have been "blue-printed" (machined to very close tolerances), this is a critical difference. Secondly, a race engine is designed to spend most of its life at high RPMs, running at low RPMs has serious negative side effects, it can soot the plugs and build carbon deposits. After the engine is warned up, we start almost immediately applying small but significant loads to it to encourage it to break-in very quickly.

"In order to undertake a very accurate test, it is extremely important that tests be done very close together in time. There are SAE correct techniques to correct for variations in humidity, atmospheric pressure, and intake temperature; however they are not ideal and they are certainly not perfect. The closer the tests are in real time the less likely there is to be any significant difference. Definitive testing is necessary and we have established that one of the best methods is to test Product A, then Product B, then back to Product A (A-B-A), and in some cases A-B-A-B testing. If you test something at one point in time, and then some time later you want to test another reconfiguration as a comparison, there is an excellent chance the base power of the engine is not the same and your benchmark has changed."

"We undertake all dyno testing in sweeps, starting below 2000 rpm then accelerating by 100 rpm increments per second, and the dyno makes dyno inertia corrections that arise while the engine is accelerating. Data is logged during these test sweeps and reviewed at the completion of each run."

Racing Beat utilizes the following components for our road testing:

The Velocity Box (VBOX) from Racelogic, is a non-contact speed and distance measurement using GPS (Global Positioning Satellite) technology. The VBOX is a powerful instrument used for measuring the speed and position of a moving vehicle. It is based on a new generation of high performance satellite receivers, and will measure acceleration, braking distances, lap times, cornering forces and much more. Due to the small size and simple installation procedure, the VBOX is ideally suited for use in cars, bikes, off-road vehicles and boats. For more technical information see http://www.racelogic.co.uk. 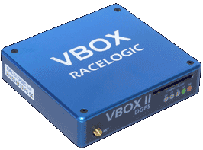 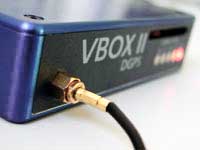 On-road Testing - "I have found the best way to judge the handling of a car in street applications, is a 40 MPH corner. I undertake other forms of testing, but this is my baseline testing. If the car is faster through a 40 MPH corner I find it is faster everywhere. 40MPH is fast enough to be meaningful, but not so fast to be dangerous or hard on the car. I have come to establish this as my starting point."

"I further tune the suspension of the car in an attempt to obtain the best results possible in this 40MPH corner. Measuring acceleration out of this corner is major part of our testing of it, the V-Box does the same thing as an engine dyno. It records a number things, most of them relating to time and position. From a specific time and position you can very accurately calculate acceleration, speed, G-forces, and display the differences. It is a very important tool, and just like the engine dyno, this GPS system's ability to record a fraction of a percentage of change in acceleration is critical to understanding a car's handling through a corner. With this device you can actually separate out the components of a corner, and tell the difference between a car that turns-in well, has high cornering power through the middle of the turn, or accelerates well and a car that doesn't. This process allows me to determine the strengths and weaknesses of a particular suspension setup."

Subjective feel - "Numbers are the starting point. If the car makes the numbers, its usually pretty good on feel. But there is no question about it; you have to adjust the car first for a touch of understeer so that the car is safe and predictable, because a car that oversteers unexpectedly is much too dangerous. It is also necessary to test in other circumstances, i.e., high speed, etc… but I have found that street speeds don’t allow much aerodynamic influences at 60, 70, or 80 MPH. Aerodynamics on a production car are just not a large component. For that reason, the basic handling does not seem to change a lot. That is, a car that is a light understeering car at 40 is a light understeerer at 60, is a light understeerer at 80, until aerodynamics start to apply, and then it will change.

Springs - "Springs are very much a matter of opinion, I adjust ride height and spring rate based more than on any other thing, my taste. We won't excessively lower a car to obtain a "look". First the car will hit the bump rubbers far too often and that makes the car unpredictable in its handling, also it makes it harsh and it is very hard on suspension components causing them to potentially fail. We therefore make relatively small changes in ride height, usually less than 1", depending on the application. We adjust that based in part on what we perceive the best way of adjusting for good handling."

"Our primary goal in lowering the car is handling, and from our point a view, improved appearance is a side benefit. We don’t lower the car for appearance, and then take what comes in handling. We are very cautious to not excessively lower the car such that it will cause perceived problems either in safety or unreasonable changes in ride comfort."

Shocks - "As far as our general philosophy in regards to shock settings, there are 3 areas in shock settings typically used. There are 3 settings- low, med, high speed inputs. The med/high speed inputs are adjusted to damp those inputs, and they impact the quality of the ride that person would feel while on city streets. This is not the speed of the car, but the speed of the input to the shock. Everything with regards to the shock depends on the speed that the rod is moving. For example, if you were to go over a curb at 5MPH, that might be a high speed input because the tire would have to move up 5" over the curb very rapidly. Whereas a 1/2" hole on the freeway might or might not be a high speed input. The shock is designed to respond differently to different speed inputs. We have taken the attitude that we make the shock no stiffer than it needs to be to get the job done. We do not intentionally add harshness to the shock absorber just to make it seem "sporty".