Some of these intakes you've already seen in the first few installments of Project Miata. However, now that the car is fully equipped with a Racing Beat exhaust and header it seems an appropriate time to start swapping intakes. So who are the contenders? Obviously, Racing Beat made the cut with the High Flow Air Inlet Assembly we've already tested in the buildup. No Miata intake comparison would be complete without Jackson Racing on board, so we sourced one of the company's Cold Air Induction units from Moss Motors in Goleta, Calif. And finally, HKS supplied its Super Mega Flow Intake for the Miata. We've included a brief overview of the installation and fitment the Racing Beat intake for those of you that don't covet SCC back issues. And, since we've yet to lay hands on the Jackson Racing and HKS pieces, we'll delve briefly into the specifics of their installation as well.

In addition to our usual round of dyno testing with each intake, we've added over the-road and static intake temperature tests. Intake temperature is perhaps the most important factor that aftermarket intakes can affect. Since every increase of 10 degrees in intake temperature costs almost one percent in power output, an intake that pulls in hot air can actually hurt power, while a properly designed cold-air intake can improve performance far more than the airflow potential would imply.

In conducting our intake temperature testing we've attempted to simulate normal driving with easily repeatable tests conducted at almost identical ambient temperatures. We plumbed a thermocouple into the throttle body for all measurements and conducted moving tests at sustained speeds (45 and 70 mph) in fourth gear. We then stopped and let the car idle, taking measurements after 30 and 60 seconds of idle time to simulate what might happen to intake temperatures in traffic.

In addition to simply presenting these temperatures for your intellectual enlightenment, we used the standard SAE correction factors for temperature and adjusted the dyno readings to represent the effects of intake temperature at 45 mph. Since we always conduct dyno tests with the hood open, this after-the fact correction is a more accurate representation of real-world power gains.

The Miata's stock airbox turned out to be quite a challenge when it came to testing. We spent a great deal of time quantifying intake temperatures on the aftermarket intakes and developed a relatively efficient system to find accurate numbers. However, since we tested the stock intake last, we were forced to spend more time verifying our data.

We discovered the stock Miata airbox is essentially an insulator for intake air. This is bad for a number of reasons. As discussed, we tested all the intakes with our thermocouple plumbed into the throttle body, since that is the one part of the intake we never changed. While all the aftermarket intakes provided consistent temperature readings, with the stock intake in place we found that intake temperatures varied as much as 40 degrees-a considerably larger variation than we saw on any of the aftermarket intakes. This was confusing at first as we hypothesized why we were seeing such drastically different numbers. Intake temperatures varied tremendously on every test performed with the stock airbox. During 70 mph testing, we saw intake temperatures of 78 degrees, 99 degrees and 110 degrees. Similar variations occurred during the 45 mph test and idle test. Sustained sampling at 70 mph showed a reduction in temperature of a few degrees per minute so no consistent numbers were produced. After sitting in traffic for a few minutes, the stock intake produced intake temperatures as high as 112 degrees upon acceleration. This, it seems, gives away the fact that the large-volume box was absorbing a tremendous amount of heat which was absorbed immediately into the engine when the throttle was opened.

Therefore, it's something of a no-brainer that the stock airbox is especially bad for an autocross-type competition. Anytime the car sits with the engine running the stock airbox will absorb heat, which will be fed directly into the engine once underway. The effect is even worse with the stock airbox than with either of the aftermarket underhood intakes we tested.

The results of the dyno testing are shown on each chart to the left. Select an image to enlarge. 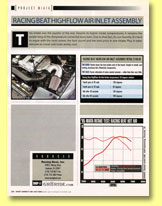 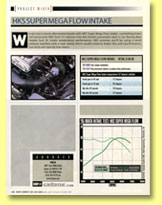 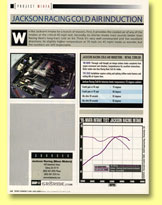