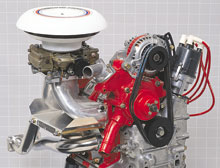 As stated earlier, Mazda began equipping their rotary engines with "breakerless" ignitions in 1980. With the 1980 model RX-7 the electronic components were located in a separate box, while the 1981-85 RX-7 models’ electronics were mounted on the distributor housing. Aside from simplifying the ignition, this change has eliminated a major problem we had seen in the earlier 1980 ignition system - a tendency to "cross trigger" between the leading and trailing ignitions.

This cross-triggering, which occurs randomly, causes the trailing ignition to fire at the same time as the leading ignition. The result is very dangerous to the engine at higher power output.

Cross-triggering is a very common problem with "aftermarket" ignitions used on rotary engines. The problem arises because Mazda's rotaries have two complete ignition systems that normally do not fire at the same time, while virtually all the other cars in the world either have only one ignition or, if they have dual ignition, the ignitions fire at the same time. This problem can be observed with a timing light connected to the trailing ignition, and will show up as a variation in timing, occasionally switching between the leading and trailing timing settings.