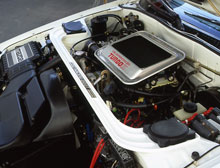 Mazda’s 1984-85 (13B) and 1986-95 RX-7s are equipped with fuel injection intake systems in both the non-turbo and turbo models. The non-turbo version is based on the 6-Port intake configuration available in the United States since 1984, while the turbo engines are based on a 4-Port configuration. The factory fuel injection air and fuel systems do not easily lend themselves to any modifications that will increase horsepower.

We have had limited success in obtaining significant power gains from either street-porting or bridge-porting the 6-Port engines and have never developed a porting template for this application. However, we can offer both tips and components when preparing this engine for peripheral porting.

When working with 1986 and later engines bear in mind the following: In 1986 Mazda removed the inner and outer water jacket O-ring grooves from the sides of the rotor housings and placed them on the front, rear and intermediate side housings. Two problems resulted: first, side housings can no longer be easily lapped and reused, and second, you cannot simply interchange housings from 1985 and earlier engines with 1986 and later housings.