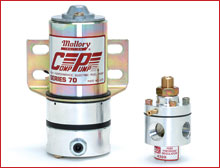 We have found the Mallory 4070M fuel pump (6 PSI) to an ideal unit for use with our Holley carburetor units.

Rotary-engined cars frequently suffer from fuel starvation caused by inadequate fuel pump delivery at full throttle. The problem arises because the pump, though it may deliver adequate pressure at idle, cannot hold that pressure when the engine demands more fuel. As a rule of thumb, we have found that, in stock street use, if the fuel pressure drops below half of the correct fuel pressure, the power output may be affected. In "street ported" engines it is undesirable to let the pressure drop more than 30% from the idle pressure. In race engines, the drop should be no more than 10% and preferably less. In actual use, fuel starvation is felt as a lack of high RPM and high speed power, even though the initial throttle response seems good.

To test the system, install a 5/16-inch "T" fitting in the fuel line ahead of the carburetor and plumb in a 0 to 6 psi gauge on a three-foot length of 5/16-inch hose (be sure to use hose clamps). Tape the gauge to the outside of the windshield so it can be read from inside the car. Start the car, check for leaks, and observe the fuel pressure gauge. The gauge should read within .5 psi of the pressure listed in the following table. Accelerate the car at full throttle in second or third gear and observe the fuel pressure. If the pressure drops below the recommended pressure limits, you may have a fuel pressure problem. Before condemning the pump, check the fuel filter near the pump. Also check for damaged or kinked fuel lines, especially under the car. Another possibility is a weak battery, and/or a failing charging system. If all else fails, change the pump. All race cars should have a fuel pressure gauge installed.

Suggested fuel pressures are as follows: