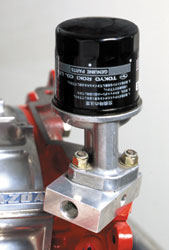 The TYPE I oil pressure and temperature adapter block allows for the easy installation of aftermarket gauges in your RX-7.

The stock engine oiling systems found on both the non-turbo and turbo rotary engines are exceptionally good and entirely adequate for even mildly modified engines.

As a general rule, oil pressure should be increased as the horsepower output and engine RPM increase. As horsepower and RPM demands increase, it is beneficial to have higher oil pressure between the shafts and bearings to prevent possible catastrophic contact between spinning components. Additionally, as oil pressure is increased, flow rate also increases; hence, more oil is available to cool the bearings and rotors.

To obtain higher oil pressure from a 1995 and earlier engine equipped with a conventional oil pump (as opposed to a "dry sump" pump), several actions are desirable. First, leave out the front cover gasket, and use only the RX-7 front cover-to-front housing O-ring (Mazda P/N N231-10-174), which is thicker than previous models. Be sure to use "silicone seal" in place of the gaskets on the sealing surfaces of the front cover. This process reduces the chance of leakage from the oil passage between the front cover and front housing. Next, select an oil pump size suitable for the job.

Beginning in 1979, Mazda discontinued the oil pump chain tensioner. Although the tensioner does no harm, it apparently does no particular good, so it can be left off for simplicity if desired.

Another factor that inhibits heat transfer from oil is air bubbles that become trapped in the oil. Air acts as an insulator and reduces heat transfer. While rotaries have little tendency to foam the oil through windage in the oil pan, as do reciprocating engines, air is mixed with the oil as the oil moves through the rotors. By slowing the oil as it returns to the pan, air is allowed additional time to separate from the oil. Our Oil Baffle Plate is designed to perform this function.

When selecting engine oil viscosity, we offer these considerations. First, if your vehicle is stock or near stock, follow Mazda's recommendations. For street or light racing use (autocross or occasional drag racing) with a substantially modified engine, it may be wise to move up to a 10W30 oil. For normally aspirated racing, 10W40 is appropriate, and for turbo racing, you may need 20W50 to maintain oil pressure at high oil temperatures. Just a word of caution : The higher the viscosity, the slower the oil circulates through the engine. This is particularly of concern in rotaries, where the rotors are cooled internally by oil sprayed from 2 jets in the eccentric shaft. If you choose too high a viscosity, you will actually decrease cooling flow to the rotors.