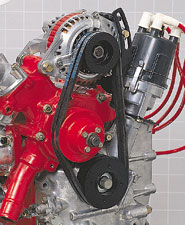 The Mazda rotary engine rejects greater amounts of heat via the oil and water cooling systems than do reciprocating engines of similar horsepower output. This is due in large part to the relatively high surface-to-volume ratio typical in rotary engines, as compared to reciprocating engines - rotary engines have a greater surface area exposed to combustion gases. Because more heat is put into the water and oil cooling jackets, more heat must be rejected in the water and oil coolers. The water cooling system is responsible for rejecting roughly two-thirds of the engine heat, while the oil cooling system rejects the remaining roughly one-third of engine heat. To ensure maximum engine life it is essential that a large, well-designed radiator be used.

In the past, Mazda’s stock coolers were more than adequate for not only stock applications, but also for mildly modified street engines, assuming the cooling components are in good condition. However, starting in 1993 the capacity of the stock cooling system was designed by Mazda to barely meet the needs of the stock car with no excess capacity for very demanding situations or modifications that increase the heat load on the engine. Based on a number of tests, we believe the primary cause of this problem is aerodynamic. In both the 1993-95 RX-7 and the RX-8, the air path out of the radiator is convoluted and restricted - leading to high water and oil temperatures. We have tried larger radiators, and to date, they have not helped. We have seen some improvement from improved sealing and directing the air into the radiator (using a spoiler lip under the vehicle) to create a lower pressure area under the car, to remove hot air.

With any rotary engine application it is wise to monitor the water and oil temperature of the engine. This is particularly difficult in the RX-8 because Mazda chose to have a water temperature gauge that does not give a linear, proportional reading. What this means is that, as the actual water temperature rises to about 170° the gauge stops moving, when the engine coolant temperature reaches 205° it starts moving again! This gives you a false impression of the engine cooling in cases where knowledge of increasing engine temperature might cause you to drive to lessen the heat load on the system. We disagree with this approach to informing the driver! For this reason, we developed a module for the RX-8 which features a set of calibrated water, oil pressure and oil temperature gauges.

1. Change radiator hoses, heater hoses, and fan belts every eighteen months. At the same time, flush the cooling system and replace with a 50/50 mixture of name brand antifreeze and, preferably, distilled water (to minimize mineral contamination).

2. The lower radiator hose must have a steel wire "spring form" inside it to prevent it from collapsing at high RPM from the low pressure (suction) at the inlet of the water pump. Squeeze the lower hose to determine if a spring form has been installed. If not, replace the hose with one that contains this critical feature. The top hose does not require a spring form.

3. Do not remove the stock fan shroud or front undertray - they aid cooling in street applications.

4. Fan clutches do fail on occasion. Check the fan clutch with the engine warm. If the fan turns freely by hand have your Mazda dealer inspect the unit, or refer to your factory service manual for inspection instructions.

5. Avoid using any "stop leak" product, except in an emergency. If you are forced to use such a product, replace or recore the radiator as soon as possible.

6. Mazda uses a "bypass" type water thermostat. If you intend to use the water pump in a racing application this thermostat must be removed and the hole below it plugged. A 2" NPT pipe thread tap and matching plug will accomplish this task.

The thermostat should be removed and the bypass plugged for racing applications, but NEVER for street use. Do not use "flow restrictors" in the cooling system, free flow is best.

7. Engine overheating is often the result of water O-ring failure, the rotary engine’s equivalent of a reciprocating engine’s cylinder head gasket failure. Additional symptoms of water O-ring failure include: hard starting, especially when cold, since water will leak into the rotor housings and wet the plugs; white "smoke" (steam) in the exhaust; and loss of coolant. Testing the coolant for carbon monoxide contamination is a fairly accurate indicator of water O-ring failure. If any of the water O-rings have failed, the only remedy is a complete engine rebuild.

8. Inspect the condition of the caps on the cooling system to confirm they are sealing well. If they cannot adequately contain pressure, the coolant will likely boil - especially at higher altitudes.

9. The factory stock thermostat opens at approximately 180°F (82°C). Under normal driving conditions the water temperature should not exceed 185°F. Should the temperature reach 200°F fairly slowly, engine damage is not likely. If the rise is fairly rapid- due to a broken hose or fan belt, for example, engine damage is more likely.

We strongly recommend that high quality gauges be used for reading engine coolant temperatures, with the mechanical versions in our opinion being more reliable and easier to calibrate. To calibrate a gauge, simply boil a pan of distilled water and place the temperature sender in the water. Do not allow the sender to come in contact with the sides or bottom of the pan. The gauge should read at, or very near 212° F (100°C). If it does not, follow the manufacturer’s instructions for re-calibration.

In most 1995 and earlier rotaries, the water temperature gauge should be installed in the back of the water pump, just below the thermostat. The original metric-thread hole can be tapped for either 4" or a" pipe thread to simplify the installation of "American" gauges. In the RX-8 this position is not practical, so we developed a special adapter fitting that can be mounted in the heater hose.

10. If you intend your engine to be used for road racing, your best choices for a radiator are either the Mazda Factory Race aluminum radiator or equivalent, paying attention to plumbing requirements.

11. Water cavitation is a serious problem with engines running at higher RPMs. Water pump cavitation occurs when water is no longer able to flow smoothly, but rather develops tiny water vapor bubbles around the water pump impeller. When this cavitation occurs, water flow rates decrease and cooling is impaired. The onset of cavitation is gradual at first and worsens as both engine RPM and temperature increase.

In general, do not use our Double Sheave Main Drive Pulley on 1987-91 Turbo II engines unless modifications have been made - shorter intake runners. etc. - to increase the engine’s RPM range substantially. Turbo II engines produce their peak power in a lower RPM range, relative to their non-turbo counterparts. lowered compression ratio. In our experience, we have found that 5 psi., approximately, is the threshold above which the stock, non-turbo compression ratio is no longer appropriate.